Home Journal Design for Experiences Brand Identity Design according to TSW: an approach based on listening, Co-Design and archetypes

Brand Identity Design according to TSW: an approach based on listening, Co-Design and archetypes

“I would like a new brand identity”, “I ask to renew the brand”, “I want a new brand identity”: these are expressions that often hide a basic confusion. How many customers believe that the expression brand identity can be associated only with the brand (or logo)? How many think that the verbal action to be associated with the brand identity is to design (or redesign)? Yet, the logo is only one of the elements of a brand’s identity, and, again, it would be much more appropriate to use verbal forms such as thinking/studying/designing the identity, rather than drawing it, being the design the final part of a process much deeper.

What is Brand Identity

Certainly I will not be the one to return here a new interpretation of “Brand Identity”, which, according to The Dictionary of Brand (Neumeier, Marty, 2004), can be defined as “a concept of marketing, which provides that the identity of a company is solid and clear so that the target reference can recognize the brand easily and align it with the brand image (defined as what the consumer recognizes about the brand).”
It is therefore a broad process of study and design, which outlines the need for a professional with an overview who generates value for the brand and lays the foundations for all possible applications.
Consequently, a substantial difference emerges between the role of “visual designer” or “graphic designer”, and the role of “communication designer”: if the graphic designer deals with the visual/operational part of the identity (the tip of the iceberg, that is what the end user sees and knows), the communication designer creates the basis for the definition of the visual project, in a broad sense, and of the brand, in the specific sense. Therefore, in the ideal flow, the design of communication constitutes the original element from which all other communicative (and not just visual) declinations originate.

How a Brand Identity is built

Ok, now that we have made some fundamental concepts clear, where do we start with the construction of this infamous identity?
I want to answer this question with another question: “who has to take care of its construction?”
Often and gladly you hear the answer: “The graphic designer!”. Wrong answer.
The graphic designer is very skilled in bringing out the substance, but often he is not the person who is dedicated to the deep investigation of identity.
Then, you say, the communication designer will have to take care of it. Semi-right answer.
To tell the truth, the main authors of the rethinking of a brand identity are precisely those who live it: it is the customers who turn to the agency, and in a broader sense, the people who live the experience of a particular brand.
The communication designer should limit himself to becoming a perfect interpreter of the message that that brand must convey in turn. He must understand the sense of identity and be able to transform it into a communication strategy, combining visual language, tone of voice, style, network of channels, physical interactions, access points.

“The real act of discovery consists not in finding new lands but of seeing with new eyes.”
Marcel Proust

As mentioned above, the main authors of the design of a brand should be those who live it.
Let’s try to pause for a moment on this concept: it is not (only) the designer himself who experiences the brand, as it is not the architect who designed it who lives a house, or it is not the engineer who designed it to cross a bridge.
The ultimate goal of every liveable project is people, who must become our first thought in every phase of the work flow.
So we start talking about Co-Design, or collaborative design: people, who once were not completely involved, or were only involved in the final development, are now a fundamental part of the process. It is they who, together with the team of professionals, actively participate in the definition of a website, a new brand identity, a new communication language.

To give a concrete example, it may happen that a company asks to review its identity (logo, tone of voice, website, social channels). The company takes care to transfer its brief to the chosen agency.
Then, in the first phase, the design team:

From here the second phase of the project begins.

“Until you make the unconscious conscious, it will direct your life and you will call it fate.”
Carl Gustave Jung

Working in communication, after all, is nothing more than working with the human mind, so every communication designer should first and foremost be a listener and observer of mankind, as well as feel close to psychological and anthropological studies.
Understanding the human mind, understanding what people want, means having hit the project goal.
It is no coincidence that some methods developed by psychology have been “translated” into the field of communication. One among all, that of archetypes, studied and signed by Carl Gustav Jung in analytical psychology.
Today’s brands, in fact, are increasingly defined by their interactions and relationships: a brand is successful when the relationships and interactions it builds and curates are successful.
At the same time, people (potential customers or simple users) demand greater responsibility and integrity from companies: it is not enough to have a nice visual system or an impacting payoff, you need truth, consistency, humanity.

Companies are therefore continually looking for ways to achieve more powerful and resonant brand commitments and, ultimately, workers crave a deeper sense of the meaning of their careers within companies.
Applying the phenomena of the archetypal methodology facilitates a more authentic, holistic and humane way of being in the business world.
The word archetype derives from the ancient Greek archétypos (ὰρχέτυπος with the meaning of “image”), composed of arché (άρχή, that is “beginning, original principle”) and typos (“model, brand, specimen”).
In analytical psychology by Jung and other authors, the term is used to indicate the innate and predetermined symbols of the human unconscious, especially the collective one. If we try to simplify a bit, archetypes are models that describe the unconscious behavior of each person.
In the course of his life a person can resemble different archetypes: in some contexts he resembles a guardian angel, in others he resembles a rebel, in still others an explorer, and so on.
In total there are 60 archetypes, but they can be reduced to 12, as can be seen from the archetypal wheel, which takes into consideration 4 areas of belonging (independence, belonging, stability, change) and the related archetypes: 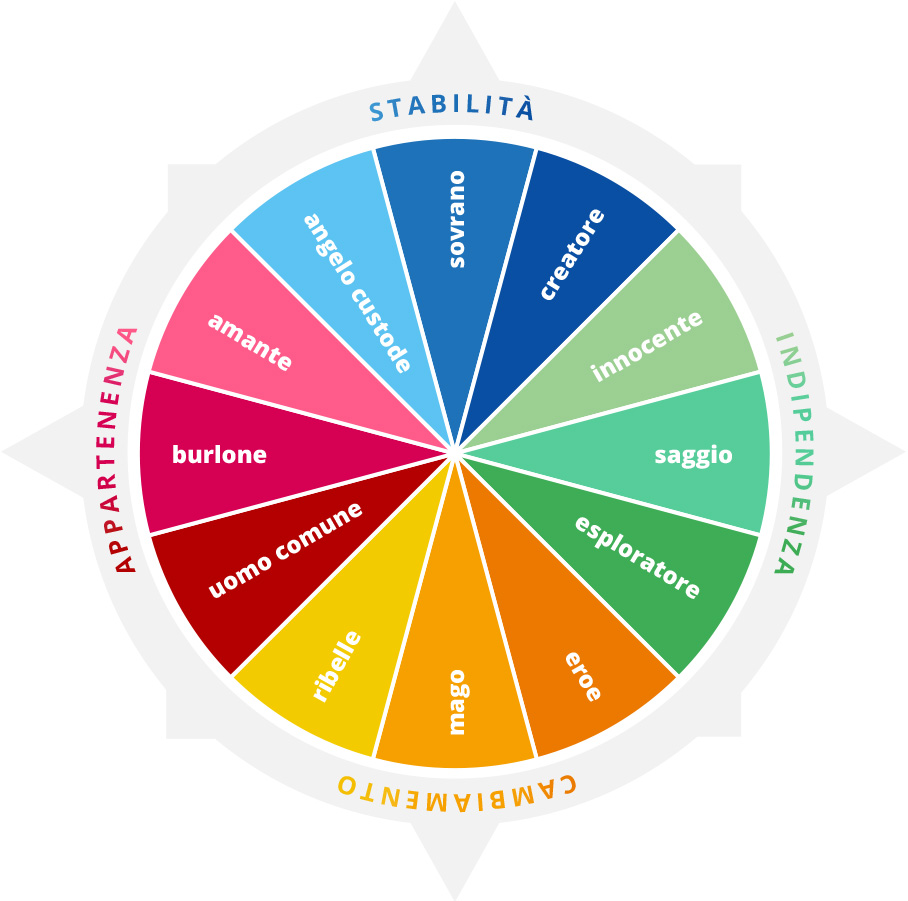 When the described method is related to the brand, one must imagine the brand as if it were a person but, unlike this, the more a brand remains faithful to the essence of a single archetype, the more its communicative message will be strong, effective and recognizable: these universal role models guide individuals and companies to remain faithful to their mission and brand promise.

Archetypes are certainly powerful attractors of consciousness: through universal symbols and stories, they create an immediate emotional resonance and affinity, an archetypal structure that reveals the authentic character of the brand.
To get an idea of ​​the use of archetypes in branding, you can see this page:
a brand like Mulino Bianco is undoubtedly an Innocent, Rolex is Sovereign, North Face is an explorer, and so on.

Thanks to the archetypal theory and the involvement of people in the design of a brand, we have the assurance of designing positive experiences, and not just aesthetically “beautiful” artifacts.