Home Journal Experiences in our projects The Last Supper by Leonardo da Vinci, between art and neuroscience

The Last Supper by Leonardo da Vinci, between art and neuroscience

Our first commitment with Gallerie d’Italia dates back to 2018 for the exhibition “L’Ultimo Caravaggio”, where we gave life to an important project aimed at knowing the emotions of visitors, in order to create the most engaging experience for visitors to the museum. I have given significant insights and results in this article. Today, however, I find myself giving voice to another activity that has recently seen us involved: the study and analysis of the Cenacolo Vinciano, of which you will find the report and a short interactive video below.

A small historical introduction to the Museum

For people who don’t know or have never been there, in a time ranging from 1494 to 1497, Leonardo painted “The Last Supper” on one of the walls of the refectory of the convent of Santa Maria delle Grazie. Although it was painted on the wall, the artist did not rely on the traditional but resistant fresco technique, but wanted to try a method that enabled him to act on the dry plaster, in order to be able to trace over the painting several times, to make better every single detail.

Unfortunately, the insights of Leonardo were wrong and soon, for an unfortunate combination of causes, the painting began to deteriorate. Over the centuries, many restorations were made to save the masterpiece. In 1999, after more than twenty years of work, the last conservative intervention ended and the remains of the original drafts were brought to light.

These are some short historical and informative notes that you can find on the Cenacolo Vinciano website. Some information to ensure everybody to understand the details of the painting during the visit. A dutiful nod to inspire the visit, but probably not exhaustive. We will see why later, through the study and analysis of the experience as a whole.

So let’s go back to the project we created and lived.

Understanding the experience of works and the path

Being in front of an artwork is certainly a unique experience. Being able to analyze and understand them allows us to structure an innovative experience within the museum. For this reason, Intesa Sanpaolo Innovation Center once again wanted TSW as a partner to evaluate the experience related to the enjoyment of the artworks and the path that leads to them within the museum.

During the experience test, a particular focus was placed on understanding how the current characteristics of the mural painting, such as light, illustrative panels and type of route, could positively or negatively influence the quality of people’s visits.

The people involved and the experiential analysis

We involved 38 people (average age 38, 25F), of different nationalities and cultures, and divided them between those who had already seen the artwork and those who saw it for the first time. They were recruited by Cenacolo Vinciano under the supervision of Intesa Sanpaolo Innovation Center. They took part in this experience in two days, in two conditions: the first as a museum open to the public and the second as a closed museum. Moreover, they had the possibility of enjoying intimately the opera before the experience test. In this last case, in fact, everyone had the opportunity to enter the cenacle alone, for 35 minutes.

Part of the research concerned the psychophysiological-behavioral evaluation, through the use of:

On the other hand, it focused on bringing out qualitative and subjective aspects linked to the personal experience of the museum visit, through an interview conducted at the end of the experience.

Participants began their museum experience following a predetermined path. With respect to this path, particular emphasis was placed on:

We see below a map of the museum and the path taken: 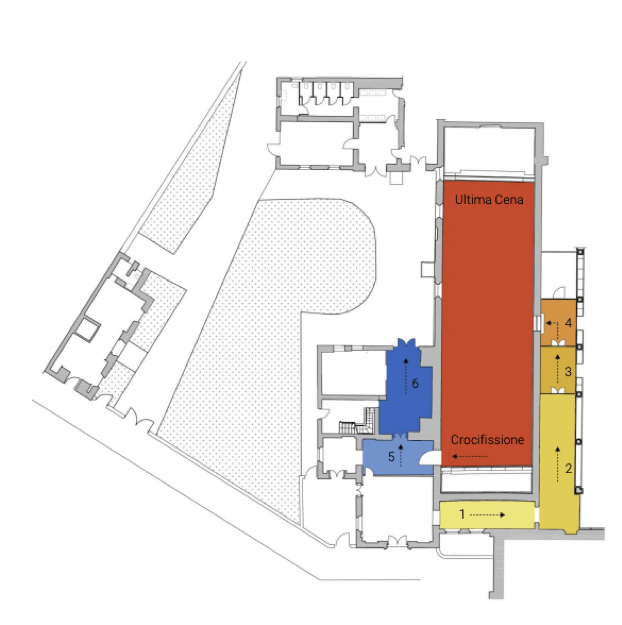 The four rooms that anticipate the view of Leonardo’s work are timed and mandatory for anyone. The people in each room receive various text and iconographic messages that help them to have insights into the works, the historical and architectural context in which they are located. A very positive experience overall, certainly with a margin of improvement in terms of content enjoyment and depth of information that each person would expect to find before such an important visit. 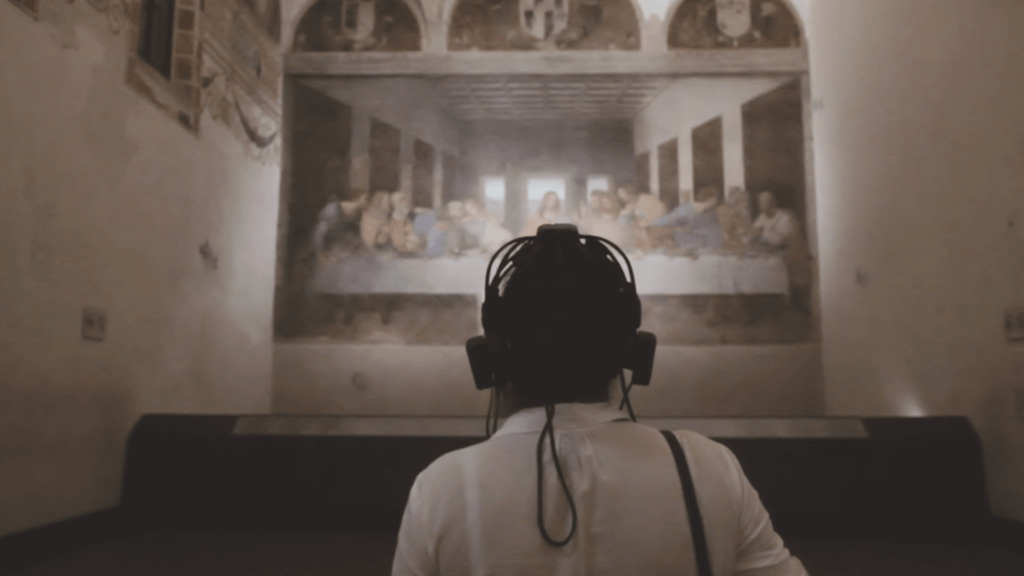 The Last Supper is undoubtedly an artwork that succeeds in generating a positive experience from the cerebral point of view, also impacting in a strong way from the nervous system point of view. The ocular behavior analysis has shown that the faces of characters and the elements above the table are the ones that mostly catalyze visual attention. The analysis of time dedicated to the observation of each apostle shows how, in addition to Jesus, the other element strongly fixed is Thomas, despite being seen as the last element, probably due to the smaller area occupied by the apostle. The fixations dedicated to the upper part of the work are reduced.

There is a considerable difference between the museum experience when it’s open, compared to the one lived when it’s closed. In particular, as an open museum the fixations focus on the central part. In the condition of closed museum, there is a greater possibility of appreciating the apostles positioned laterally. 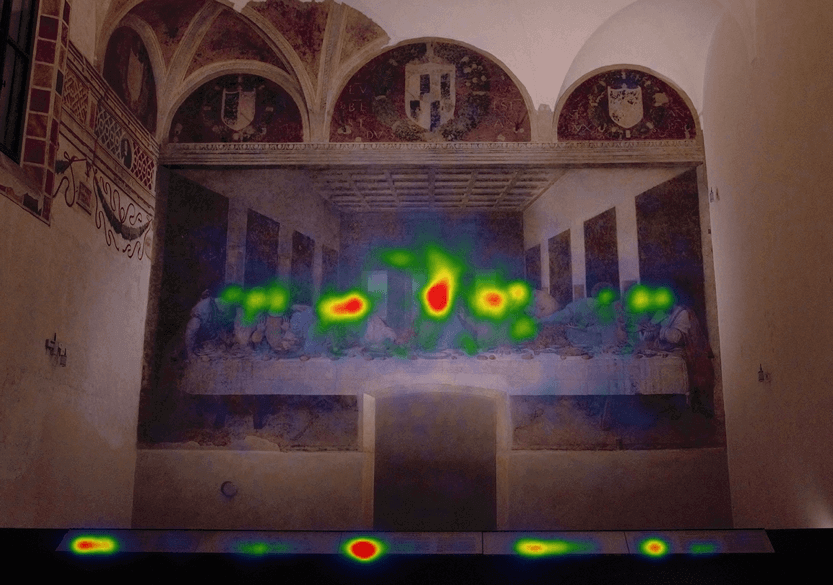 The information material placed in the lower part of the painting acts as an attractive element. 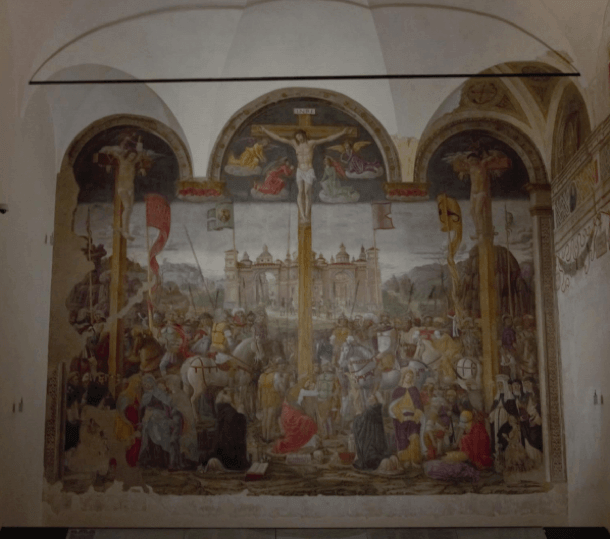 In the same room, people found another important artwork they didn’t know to be there: The Crucifixion. This is the second artwork in the Refectory of the convent of Santa Maria delle Grazie: participant realize it’s there just when they enter the hall. The enormous fresco was signed and dated 1495 by Donato Montorfano and it’s one of the few artist’s certain works.

In fact, in our analysis it emerged how its position – in front of the great Leonardo masterpiece, but above all the level of information provided – is penalizing this artwork. Let’s see in detail what emerged.

The element of the painting that most attracts the fixations is the base of the cross: that means there is great attention to the detail of the entire work. The iconography of Mary Magdalene is the character that stands out and emerges from the crowd, for what concerns the attention point of view. The information elements positioned below the work are effective and involve people, even if they have different effects whether the museum is open or closed. In fact, there is a greater tendency to read all the information elements when it’s open, while when it’s closed, people tend to select only a few. This was a surprise for us: it would be more natural to think that people, being able to enjoy and benefit in total tranquility of the work, were more inclined to deepen details and contents of what they were observing. Instead the test has put us in front of the contrary inclination: in similar contexts it is the presence of people to lead us to enrich our baggage, driven by the tendency to emulate what others are doing.

In general, there is a lot of curiosity and interest in the information material that provides details with respect to the work, the artist and its realization. The nature of the stimuli (text vs image) prevails over the work, in which the fixation distribution has been noted that is decreasing as the height of the work increases (the highest part systematically receives less fixations).

What did people tell us?

As we often say, the value of people is incredible. The overall experience was very positive and well structured, and thanks to the analysis we were able to understand significant elements and trace possible cues to make it even more complete and engaging.

Before experiencing the artwork: waiting is an integral part of the fruition of the work. It is a moment characterized by a high motivation to find information and people are led to carry out activities that require greater effort (such as reading all the textual content in the rooms). This is the reason why people express the desire to have more information about:

During the experience of the artwork: Particularly appreciated is the condition of penumbra, which makes the experience unique in its kind, and the reduced presence of elements inside the Cenacle, enhances the work. The present information works, with particular added value for the shapes that allow the identification of the apostles.

After experiencing the artwork: The experience can be considered complete when all the participants have visited The Last Supper. In the end, we can say in this context, elements characterized by a greater engagement would work very well.

Create an experience capable of attracting people, also thanks to their listening

What could we share with the Cenacolo Vinciano Museum?

People’s experience was emotionally intense and enjoyable both from a declarative and a psychophysiological point of view. Being able to listen to the participants and observing them in a real context has allowed us to understand multiple aspects of the experience in the museum; through their gaze and their sensations, it was possible to grasp precious indications that those who live in certain places and certain situations every day are no longer able to perceive objectively.

As noted through the involvement of people and their listening, it represents an enormous potential in terms of valorisation. It would allow us to suggest to the curators of the Cenacolo Vinciano Museum the adoption of some improvements in some areas of the path, where not already in place, and the creation of supports capable of highlighting the sections that arouse less attention, but which can be revealing of important aspects and can motivate the visitor to continue the visit with greater involvement. Moreover, it is useful to underline that the analysis of brain activity shows how sharing the experience with other people generates an effect of superior pleasantness, compared to the condition of a closed museum. In some ways being part of an elitist, but still shared, experience generates a better experience overall.

It is not surprising that the Last Supper is a work that moves: what we can say, is that we have understood how, how much and in many cases why.