On Thursday 18 June, the European Parliament voted on a measure passed so far under trace, but which risks having extraordinarily disruptive implications in the digital world.
Paul Tang, a Dutch Socialist Euro MP, has proposed banning personalized advertising on the Internet. Proposal that has received an overwhelming consensus, with 503 votes out of 701. Extremely satisfied Tang, who commented thus: “With this declaration, the European Parliament throws a stone, like David in Goliath, towards the head of American tech giants. These companies continue to use our personal data as a revenue model to exclude competitors. Although this is the first stone launched, it is a significant step against the power of big tech“.

What implications will this provision have? Will Facebook and Google face the most extreme of resiliences, reviewing their business model? But above all: how did you come to such a full-blown aversion to online advertisements? Here, let’s start from here. Indeed no, let’s take a step back, and let’s start from the reasons why online advertising has undermined that on traditional media.

Why is online advertising successful?

When we talk about advertising, regardless of the channel in which it is placed, the fundamental subjects are always the same three. The advertiser company, the agency that performs the role of media consultant and the people to whom the advertisements are intended.

And the objectives, for each of the three subjects, are clear and blown, unchanging despite the evolution of means and formats. Even in online advertising, the company aims to convert, be it the purchase of a product, the membership subscription, the compilation of a form or other. The consulting agency shares its objectives with the company: to optimize the efficiency of the advertisement, obtaining the greatest number of results in the face of the lowest possible cost. Recipients, however, are satisfied with two things: do not be disturbed by too intrusive advertisements, and above all not in line with their interests.

Goals that online advertising can (almost) fulfill perfectly. At the expense of advertising conveyed on traditional media (TV, press, radio, billboards), consultant agencies are able to monitor the performance of each advertisement with almost instantaneous precision, intervening just as instantly to correct its progress. In this way, it is possible to guarantee the advertiser company the best possible optimization of the budget made available. What about people?
Here are the reasons that led companies such as Facebook and Google to play a fourth role of considerable importance. Why is advertising on Google so successful? Because Google perfectly knows what we are looking for with greater interest. Why is Facebook advertising so successful? Because Facebook constantly collects data on the behavior of people within it, thus managing to draw a sufficiently accurate profile. 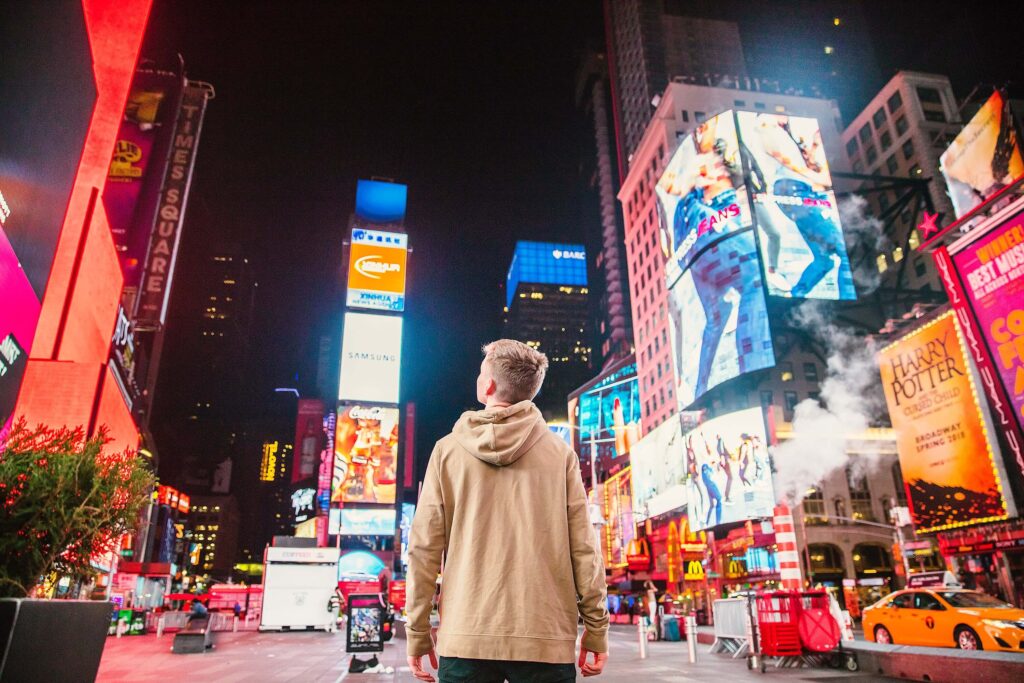 In the last lockdown period, have we been looking for a monitor to be installed on the home desk to facilitate smart working? If this search was made through Google, and if this search was followed by clicks on some of the results that appeared after the search, then Google will perfectly know which monitor models we are interested in, and the degree of intensity of this interest. If a company that produces monitors wants to submit its advertisements to us, it should not be difficult to present itself and its products: we are already at an advanced stage of the conversion process, it will be enough to see if the monitor proposed by the advertisement meets or not our taste.

Are we passionate about football, and do we follow numerous pages on Facebook that deal with this topic? Thanks to this interest, have we made new bonds on Facebook, nourished and cultivated thanks to daily interactions around the theme? And how could we revive our interest during the lockdown, when every sports championship stopped (fortunately)? Could it be a coincidence that there appeared that post that proposes you to buy the Blue-ray with all the matches of Italy at the 2006 World Cup? Facebook knows what we like and what doesn’t, so we will hardly see product listings far from our tastes and our universe of values. How does Facebook know about all this? We told you.
Such a success that has led companies to invest increasingly large advertising budgets, which have had – among many – two effects often underestimated. They crowded people’s feeds and minds with an unmanageable number of communications to extricate themselves from. And they have linked their economic sustainability to this business model, as we will see later.

Online Advertising: Why Don’t Many People Endure It?

However, as Joanna Coles (former Chief Content Officer of Hearst Magazines) said at Advertising Week 2019: “People hate advertising. And it’s all the fault of the advertisers.” A very strong statement, but confirmed a few seconds later by Marc Pritchard, Procter & Gamble’s Chief Brand Officer: “We tried to change the advertising ecosystem by doing more advertising, and it did nothing but create more noise.” And precisely at this point, according to several experts in the sector, lies one of the main reasons for the decline in the popularity of advertising. According to a study conducted in the United States, an American is exposed on average to a number ranging from 4,000 to 10,000 advertisements per day. Literally an information overload that disturbs the recipients, making them give up any action more demanding than the mere impression (display of the ad) given to the advertiser on duty.

An enormous increase in digital media, where space, time and opportunities to intercept advertisements have increased tenfold compared to the past. An overload that in 2019 led almost 1 in 3 people to use an ad blocking application to stop viewing online advertisements deemed irrelevant or simply too repetitive.

Finally, such an overload of online advertising that often and willingly prevents people from observing and knowingly evaluating the difference in creative effort between the various advertisements. This is because digital channels, primarily social networks, have led many advertisers to privilege visibility over relevance. A ring without side ropes that opens to a potentially infinite number of players and advertisers, in which the only way to emerge from the fight is to spend higher media budgets.

In light of all this, the online advertising framework is more complete; and a consequence such as that which resulted in the European Parliament’s provision appears surprising, but cannot be said to be unexpected.

And to fully understand its potential – potentially overflowing – it is necessary to make a point on the business model of Facebook and Google, the two main players in online advertising. According to Statista data, Google closed 2019 with a turnover of 160.74 billion dollars: of these, 134.81 billion (83.8% of the total) comes from advertising sales. A report that increases dramatically in Facebook’s balance sheet: in 2019, advertising revenues (69.7 billion dollars) accounted for 98.5% of total turnover.

An extremely solid and dangerous addiction, in the face of the European Parliament’s decision to ban the use of users’ personal data to convey highly personalized advertisements. If Facebook and Google cannot leverage their knowledge of users, advertisers will no longer be able to deliver advertisements tailored to the recipients, estimating a degree of efficiency (between results and costs) that estimates perfection. If advertisers are forced to reduce the personalization of the ads, it means that they will have to return to “broader” advertising tactics, replicating the information asymmetry that has regulated the functioning of advertising for years. Create strong and distinctive advertisements to be submitted to a wide audience, within which, however, people strongly interested in the message lurk. Will we see a new increase in advertising costs? Will catastrophic scenarios open up for advertisers, media agencies and consultants?

The future of online advertising (and communication), and reconsideration of KPIs and vanity metrics

Absolutely not, especially if Facebook, Google and other online advertising operators are given the opportunity to collect aggregate data on the trend of the advertisements within them. Indeed, it will be an opportunity to refine the monitoring, analysis and processing of this data. First of all, the agencies will be called to a more detailed and punctual analytical approach, working hard to read people’s behavior. And we will have to start above all from a better definition of the KPIs, the Key Performance Indicators that all subjects of communication share in order to evaluate its effectiveness and efficiency. Vanity metrics, indicators strongly linked to the timing with which an ad is presented, will have to be put aside, and more focus must be placed on more significant metrics for the objective initially shared between the company and the agency. Less space for interactions and followers, and more attention to CPM (cost per thousand people reached) and CTR (Click Through Rate).

Furthermore, it will also be necessary to intervene on the creativity of the advertisements, which will have to return to being relevant and truly aligned with people’s modus pensandi. In fact, according to Keith Weed, Unilever’s former Chief Marketing Officer, another major advertising problem lies in trust: “A brand without trust is just a product, and advertising without trust is just noise.” The days of Mad Men are over, and even The Weapons of Persuasion – a masterpiece by Robert Cialdini on how to implement marketing actions with an almost inevitable success – risks ending up accumulating dust on your library.
People want to trust brands, they want to dialogue with companies that give consistency and future to their affirmations. People are willing to play an active role in the face of consistent, effectively functional and not unnecessarily pretentious communications. In our case, this is what happened on the Facebook page of ULSS2 – Marca Trevigiana, a hospital company in Treviso and its province. During the lockdown imposed by the COVID-19 pandemic, thanks to an open and honest communication towards people, this institution was rewarded by its public, obtaining extraordinary results without even investing in advertising budgets. Online advertising is not dead, it will only have to adapt to the new ecosystem born around it.