Last week we talked about automatic processes and implicit responses, and how these processes linked to people’s primitive brains can influence the decisions taken prior to the purchase, and more generally the purchasing behavior. Today we focus on these automatic processes influence people’s perceptions of brands with which they come into contact, starting from the Zero Moment of Truth.

The application of neuroscience to consumer psychology, and branding in particular, has gained popularity in the last decade. The investments in this context have grown exponentially as evidenced by Plassmann (2012). The number of scientific articles, the Google Hits and the birth of new institutions dealing with the subject are clear and concrete proof of this.

Undoubtedly, technological development in the context of neuroscience and the possibility of investigating different contexts more and more accurately has allowed the explosion of what has long been an extremely sensitive area of ​​interest for companies (Ariely & Berns, 2010). Understanding customer loyalty through the brand is an important element of success for a business strategy. The objective of this article is to explain how the psychology of a brand actually influences the user, and how the Neuromarketing has made it possible to investigate these processes.

In the field of advertising research it has been observed as the so-called implicit mechanisms (or processes with low involvement or automatic choice) can intervene in all processes of interaction with a brand, starting from perception and memorization up to the concrete purchasing behavior. The choice of the product-service takes place in most cases without a particular involvement of controlled and rational processes.

Traditional marketing research studies the behaviors and conscious processes that individuals can recognize, but these techniques fail to capture the automatic and parallel processes linked to emotions, which in most cases occur unconsciously and play a decisive role in the perception of a brand.

This implicit automatic memory lends itself to being an evolutionary system necessary to make up for the enormous amount of stimuli and choices to which our brain is constantly subjected. According to “Dual ProcessTheory“, model proposed by Daniel Kahneman, there are actually two brain-level systems of potential activation: 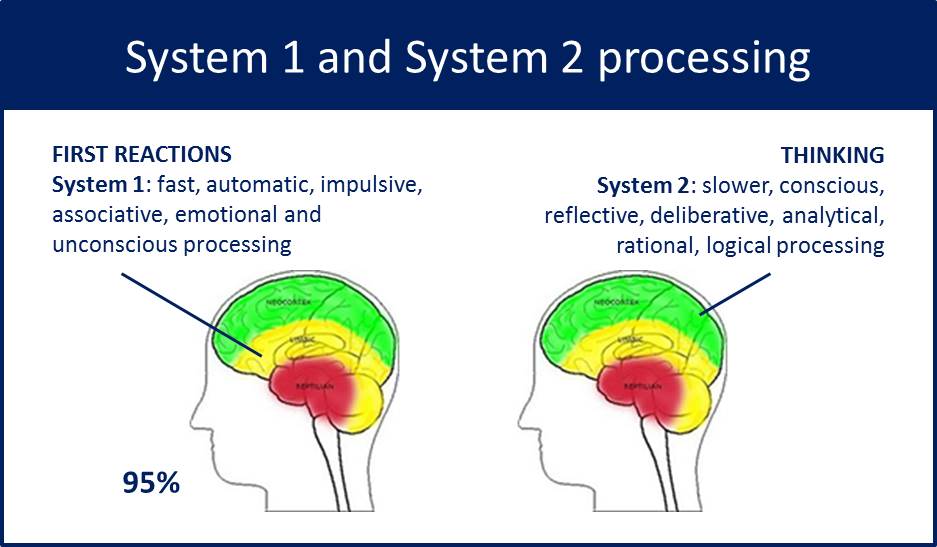 To understand the operation we do an example. The first day of a new job always raises the question of the road best suited to reaching the site, the shorter or less busy one. In this case the system 2 comes into play. We need to combine all the information to try to optimize our choice. Once this decision is consolidated, the brain will avoid asking itself every morning which way to go to work and consequently the choice of the roads will pass through automatic mechanisms, or it will be the responsibility of the system 1.

The same reasoning is attributable to the choice of a product. Brand engagement and purchasing decisions are linked to deep-rooted and automatic emotional traces, without consumer awareness: the low-involvement automatic neural processes predispose little conscious attention and the creation of free associations, automatic and instinctive storage connected to these associations. This model explains why, for example, inside the supermarket we always head towards the same products, or to the same brands that somehow have satisfied our requests / needs in the past.

But how much do brands influence consumer behaviour?

Within a process of preference and buying behavior, the emotions they are active and determining variables.

The emotional marketing approach uses the neuroscience tools to describe what consumers’ emotions are during interaction with brands, creating new integrated research models.

In the early years of the 2000s, the research of neuromarketing to investigate neural activity in relation to consumer preferences regarding brands. The most famous study is that conducted by Red Montague (McClureS., Montague M., 2004) who analyzed and studied the behaviors in the brain and declared preference of consumers, associated with the preferences of two well-known brands: Pepsi Cola and Coca Cola.

The research hypotheses were as follows:

·    Does knowledge of the brand of the product consumed influence the satisfaction of the experience?

The method used was to correlate the neuronal responses measured with fMRI (Functional Magnetic Resonance Imaging) and the preferences expressed by the subjects and, subsequently, to compare the declared preference and the neural activation during the tasting of the drinks without knowing the brand (blind test) and with the knowledge of the brand.

The results of the comparison:

·    in blind test subjects’ preferences were distributed equally between Coca Cola and Pepsi and activation of the ventromedian prefrontal cortex occurred through measurement with fMRI.

·    in tests in which the brands were first declared to the subjects, instead, the declarations of preference of the subjects were pro Coca-Cola and the activation of different brain areas was presented: the hippocampus, the dorsolateral prefrontal cortex and the brain stem.

The study shows that the brain areas activated during the conscious tasting of the beverage brand are different from those activated by the blind tests. There are two distinct neural systems that generate preferences in the subjects: when the senses guide individuals in the preference of the drink there is a brain activity that involves the ventromedial prefrontal cortex that elaborates the hedonistic values ​​(Graziano M., 2010). When the beverage brand is known, the active neural system involves the structure that regulates the storage and encoding of episodic memory (hippocampus), the dorsolateral prefrontal cortex instead, deals with cognitive control and regulation of working memory (or shortly term) and both structures are involved in behavioral changes.

Montague’s research shows that the cultural messages related to the brand influence the subjects’ preference decisions, through the involvement of the dorsolateral region, the prefrontal cortex and the hippocampus, areas related to self-assessment and pleasant emotions. The messages about a brand condition our preferences to the point of affecting their perceived pleasantness and may have a weight within the processes of preference and consumer behavior.

Despite the similar chemical composition of the two products, consumers are strongly inclined towards Coca-Cola when the brand awareness is caused by its “cultural” strength in terms of subjective identification in the advertising of the brand itself (Babiloni F., Meroni V., Soranzo R., 2007).

In the next section, we will try to further investigate what makes it possible to increase the chances of buying a product, and how the decision-making process works.