Home Journal Experiences in our projects Branded Content and Branded Entertainment: the case of Digital Visual Novels created with Despar

A few days ago, on June 30, 2020, I gladly followed “The reason WOW“, an online event on the topic of Branded Entertainment, organized by OBE. A point on the market, the trends and projects of those brands that, in this particular period of crisis and health emergency, have been able to generate engaging stories for their target audience, challenging and rewriting the rules of entertainment.

In addition to being personally interested, given that this is an approach that allows you to train creativity and listening to people together, it touches me closely as in TSW we have recently completed a project conceived and developed starting right from the concept of involvement of people, using original content in which the presence of the Brand is rather marginal.

But let’s go in order and take a step back first.

Those who are unfamiliar with this term might mistakenly think that this is purely advertising-related content, but it is not. Branded Content is content created by the brand to attract, entertain and inform on topics of interest to its audience, inherent to the brand in some dimension of values and business market, but not related to a product or service.

By definition, “A Branded Content refers to content without an explicit advertising message, produced ad hoc directly or on commission by a Brand, to convey and consolidate the values connected to the Brand and thus increasing its Awareness”. It is therefore a content that aims to capture people’s attention, arousing amazement, emotion, hilarity, or, why not, even less happy but no less intense feelings.

The brand is therefore no longer the protagonist of the message, as the word “branded” of this binomial might suggest, but rather it is directing, as a producer, or even media company, moving away from direct commercial purposes to meet people in a common cultural space.

Branded Entertainment: between involvement and seriality

So today we can talk about Branded Entertainment. In a scenario in which commercial messages are increasingly ignored, companies must communicate with people with the aim of getting more and more in touch with them, involving them, making them feel part of a community and rewarding them.

Those who choose to use Branded Entertainment, they also choose to give space to a type of entertainment that very often it’s the user himself to seek, just as a spontaneous form of interest or curiosity. This type of content has also helped to avoid that form of rejection, often unintentional, experienced by many consumers towards different forms of advertising that are too invasive, insistent, or repetitive.

Branded Entertainment therefore aims to entertain, and depending on the case, to inform, with the possibility of maintaining the consumer’s attention for an extended period of time, well beyond that handful of seconds that people are willing to dedicate to content on social networks.

This is how original contents such as web series, interactive commercials, documentaries, live events and video games begin to appear with Branded Entertainment, funded by the Brands themselves, which develop in short narrative formats characterized by a certain seriality. They work well when they are built as recurring appointments in order to keep the user glued to the screen and not to sell a certain product.

The project started with a request from Despar, a brand among the leaders of large retailers and with which TSW has been collaborating since 2018. The company’s desire was to build a more defined identity for one of their social touchpoints, namely give a more strategic role to the Instagram @DesparNordest channel.

The idea that launched the project started from listening to people and then developed around the creation of a new online engagement strategy and campaign on the Instagram channel, with the aim of accompanying people on an illustrated journey to discover of the values ​​of the brand and the community itself. What did we do specifically? The social engagement project created ad hoc for the Despar Instagram channel, called Digital Visual Novels, provided for the hiring of young illustrators from the area (Triveneto and Emilia-Romagna), called to create and tell the Brand through original stories and vignettes. This is how, following the definition of the strategy and the ideation of the concept, we took care not only of curating the relationship with the illustrators (studying with them the right balance between the presence of the Brand and their communicative style, to be reconciled to the inside the illustrated tables), but also to write the scripts and contents of the stories that we would go to represent.

The project was successful thanks to the creation of content aimed at entertaining. We wanted the illustrations and stories themselves to highlight the talents of our territory and communicate the values of the Despar, without focusing on commercial promotion. We created a campaign capable of putting people at the center, involving them and bringing them closer to the brand in an innovative way, increasing the degree of relationship and interaction with it.

The first episode “Despar Lovers” was entrusted to the dreamlike and fairy tale style of the illustrator Cinzia Bolognesi (@cuordicarciofo on Instagram) who, through 27 illustrations published in 9 different carousels, told the adventures and curious encounters of Isabella, character of fantasy and protagonist of the story, inside a Despar store. With this project, TSW wanted to strengthen the dialogue, the interaction and above all the listening between Despar and its users, so much so that we asked them to choose the ending of the first Digital Visual Novels: it was a surprise for us too! (You can read the whole story HERE)

Thanks to the partnership with the Treviso Comic Book Festival, listening and storytelling also continue offline

Following the publication of Despar Lovers, the first Digital Visual Novels, every month we animated the Despar Instagram channel with new stories, created by as many illustrators called to renew the attention on the channel. One of them was Giulia Antonello who illustrated with strong personality and captivating colors, the engaging investigations of the Commissioner Latte Fiordi, linked to the mysterious disappearances in that of Desparopoli. 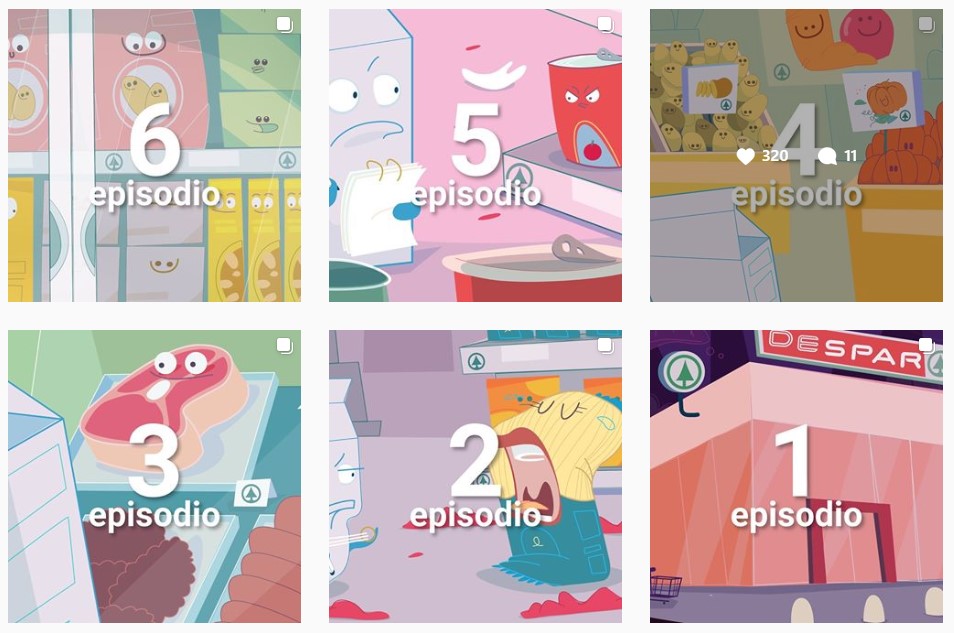 The illustrator of Desparite, the third Digital Visual Novel linked this time to Christmas, was Alessandra Kerstulovich, chosen from among the young candidates under 30 with whom we came into contact following the partnership with the Treviso Comic Book Festival in Treviso. In this way for us at TSW it was possible to decline the strategy started on the Instagram channel even offline, also joining the painting and illustration initiative of one of the shop windows of the Despar store in Treviso, in Borgo Cavalli.

Branded Entertainment and Digital Visual Novels: an effective proposal for a long-term return

The potential of entertainment content is remarkable when we talk about engagement: they lead people to interact with the Brand and its digital channels in an almost completely natural way. It is, in short words, of content entertainment, in which the brand takes a step back to put stories and people in the spotlight. How do you measure all this? Thanks to the many interactions generated with and between users, but above all by making the numbers speak: we recorded a doubling of the number of followers of the Despar Instagram channel, a 100% increase triggered by an increasingly strong sense of belonging to the transmitted sphere of value from the Brand. And that’s not all: the contents of the Digital Visual Novels have collected more than 13,609 likes, reaching a total of 2,521,910 people.

This innovative project for us at TSW meant a lot because it allowed us to experiment with a counter-current approach to the Instagram channel. The fun was not lacking: we brought home (or rather in the office) the experience of a Branded Entertainment project by creating 4 Digital Visual Novels which, in different ways (also thanks to the interactions in the Instagram Stories), have always provided for an active and participatory role of people. We asked them to choose the ending of the first story, we challenged them to identify the culprit of the second story, we provided them with clues and riddles to solve to understand who had stolen Santa’s reindeer in the third story. And we too are far from bored!

Being able to work alongside Despar, being able to interpret customer needs and translate them into innovative projects, for us in TSW is an enormous value and opportunity because we are increasingly aware of the importance of designing together with people, listening to them and involving them to improve the quality of their experiences, and consequently that of our digital projects. The Digital Visual Novels project is in fact part of a wider collaboration that we have been pursuing with Despar for a couple of years, an approach that has the will to monitor social channels in a more careful and innovative way, tools that are still very important today for create relationships with their customers and listen to their needs.