How Ulss 2 Marca trevigiana communicates effectively with people on Facebook

Ulss 2 Treviso aggregates the former Ulss n. 7 Pieve di Soligo, n. 8 Asolo and n. 9 Treviso in a single socio-health company that represents the reference for the entire Province of Treviso. From 1 January 2017 the new Ulss 2 was born, which decided to immediately express its closeness to the user by choosing to communicate its initiatives through a very popular medium: Facebook, which has been used by the company since May 2017 with a very dynamic page.

The content strategy adopted for the page basically follows three different paths: sharing information about territorial structures, about initiatives by the company and health-related advice at 360°.

This is the result of a collaboration with us at TSW. A job that aims at making the Ulss 2 Marca trevigiana even closer to people, in order to optimize communication with citizens and simplify a world that still speaks bureaucratic too often, resulting austere, rigid, difficult to understand. During these two years together, the results have been very satisfying in terms of humanization, with more and more people coming back to the page to get information and learn about the initiatives of Ulss 2.

These are the successes achieved so far, with only organic results, without paid support activities:

The language of Ulss 2 Marca trevigiana

How to get closer and closer to the citizens? Speaking their own language. The language of Ulss 2 Marca trevigiana on Facebook is institutional – the authority is still necessary when a specific role is played in the society – but very close to users. And then, with the social channels the company has the opportunity to express more closeness and humanity than is possible with more traditional means, such as the website or offline communication.

The posts follow very precise graphic lines, based on clarity and comprehensibility of the information conveyed. Moreover, Ulss 2 produces many original contents, both in terms of curation and in terms of editorial and video production for Facebook.

The visual contents spread through the Ulss 2 Marca trevigiana Facebook page are presented in different formats: from static graphics with a neat and recognizable photographic style, to infographics. Also videos cover a very important role in the company’s content strategy, often involving directly many doctors from different territorial structures, each bringing their expertise directly at the service of people. 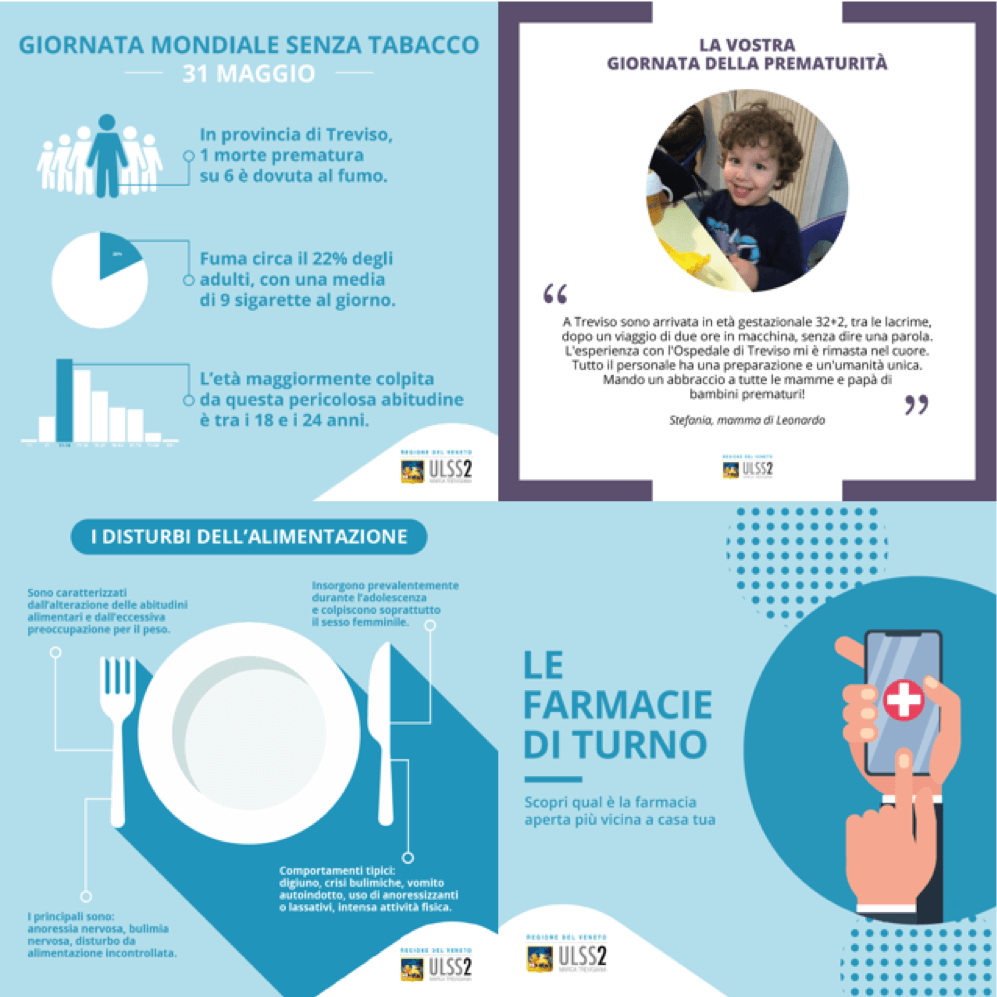 The presence of Ulss 2 Marca trevigiana on Facebook is based on information and messages sharing, both related to the institutional face of the company, but also to have more engaging contents, which allow Ulss 2 to:

As anticipated when we talked about the language of Ulss 2, the content mix for Facebook is based on content of various kinds and types, where the graphic element is predominant, but is expressed in different ways, such as photo posts, infographics, video slideshows and original videos.

Going to analyze in more detail the editorial strategy devised for the company, we can identify different strands:

After about a year of publications that followed the established editorial lines, the Ulss 2 decided to ask its followers on Facebook directly which themes they would have liked to investigate together with the company. A way to get even closer to citizens and their needs. 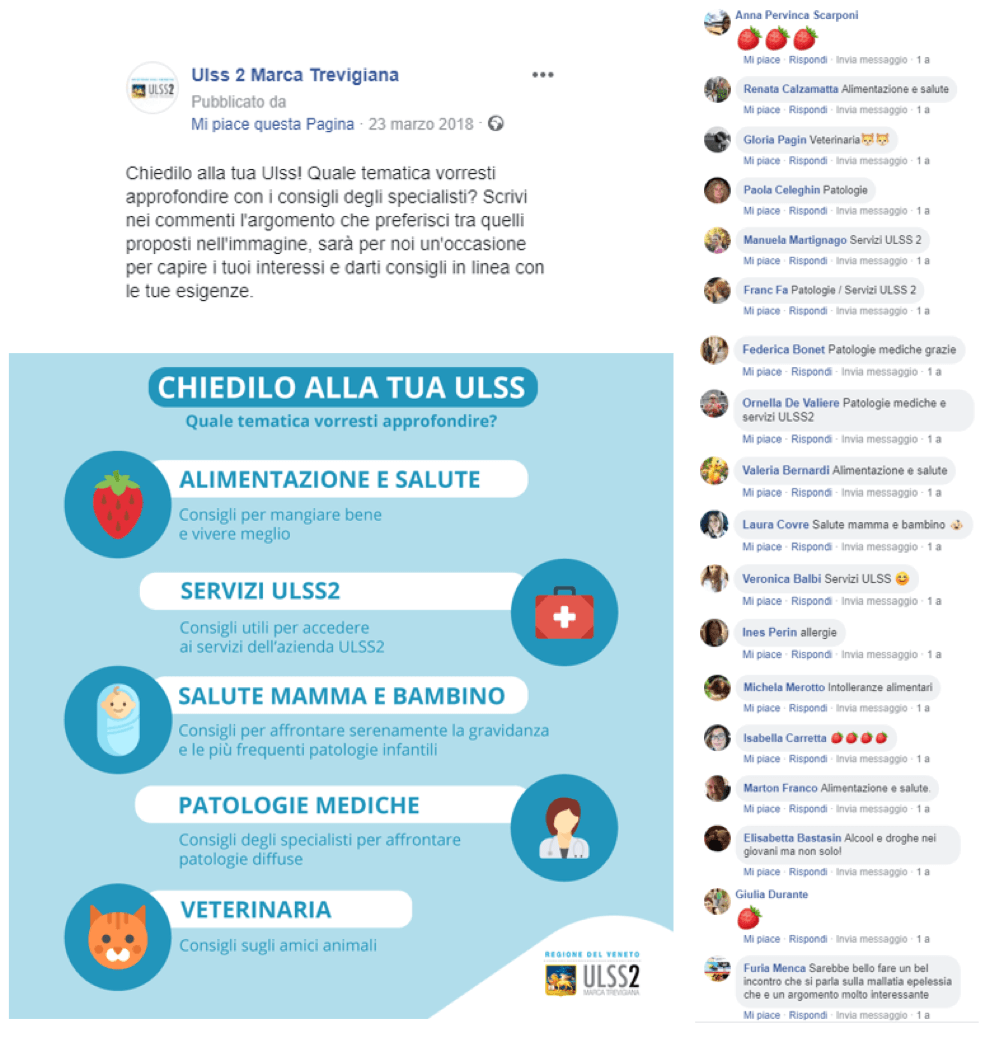 Ulss 2 with TSW gave birth to a real case of co-creation of the editorial strategy, in which the company involved people asking them what the most interesting topics were, in order to propose contents in line with their needs.

The list of themes to choose from was however delimited: a post with infographics proposed the subjects in a very clear form, namely – as seen in the image above – Nutrition and health, Ulss 2 Services, Health Mommy and Child, Medical pathologies and Veterinary. The people who followed the page could vote for the most important topics by leaving a comment below the post. This selection method has naturally favored the emergence of original ideas, outside the themes proposed, which offered insights on further potentially interesting topics for users to be taken into consideration for the future.

“When people realized that our page took into consideration the ideas that were given, they started to interact even more. The data on organic performance have shown themselves to be constantly growing and for us it is an excellent result. Not only in numerical terms, but above all as regards the closeness with our users. The objective linked to the use of Facebook, for Ulss 2, is to optimize communication with citizens, using all the tools available .”

When they feel heard and understood, people trust in companies. And this is exactly what happened with Ulss 2 Marca trevigiana and the content marketing activity conducted together with TSW on Facebook. The objectives of approaching citizens and humanization can be considered achieved, with increasingly positive results. People, thanks also to the dialogue that takes place via Facebook, trust in Ulss 2 and have established a strong relationship based on mutual trust. They know that they can contact the company via Facebook to get an immediate response, receive prompt, truthful answers, in a known language. An involvement that starts from the territorial proximity of the company and follower, but that is built and made stronger and more effective thanks to the common language, the formats used and the messages conveyed.

Ask people what they want to know, respond with interesting information for them, telling them simply. This is the secret of the content strategy developed for Ulss 2, this is the secret to get closer to people and making the service easier and closer to most.