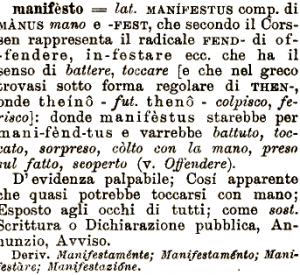 Manifesto is a noun that derives from the Italian adjective “manifesto”, which would mean “(of) undisputed evidence”, but I care of two things here: that we discuss it, and as much as possible, and that we understand that he has an hand inside (the etymological Italian “mano”), the hand of man I mean.

The hand is what most indisputably characterizes the activities of man and this is what we are talking about: qualitative actions of and for human beings.

In rereading it, and I invite you to do so, you will find that those of the Manifesto are sentences of stringent simplicity, but they cannot really be read and understood at the current rhythms, they require us to slow down, if not to stop and think, and are not true, or they will not vibrate, unless they are understood and experienced personally.

The Manifesto of the Sixth W speaks of people, of their involvement, precisely of With, which is a good practice and an antidote especially if it is aimed at certain corrupt practices.

Important to me, however, is that you don’t want to see what is really not there yet, and I make it explicit:

After about twenty years of working on people’s experience, in the world of digital interfaces first and more recently on the quality of all-round experiences, I found myself at a turning point that seemed to me more and more manifest; in fact.

A turning point, or a change of vision, which was required, in my opinion, not only to me, but also to my collaborators, to our partners and I would say to all the sensible people who listen to the world and they worry about where we are going and what practices are detrimental to sustainable, and I dare say ethical, development of our lives; or if you want, more simply, humanly shared.

A turning point for all professionals who want to do their work in a non-mechanical way and find again the value in it, and perhaps the true and original goal, or make profit by generating value for individuals (and only thanks to this bring value to shareholders).

In fact, I think that only those who make a radical choice today, that is, to change the objective of their work, from profit to value, can really win the challenge that the future is presenting us; the things we do must have real value for others.

I happen to read or hear many contributions in which reputable people tear their hair to the risks related to the freedom of individuals, to the preservation of potentially better-done-by-robot jobs or to the influence of artificial intelligences on systemic choices … this generates anxiety and I don’t know how much it sincerely hits the mark.

While there are few, but fortunately there are, who are worried about the values of humanity, what it means to be human beings today, not to reify people or to commodify our work by standardizing it or by automating our mental processes. People who study, think and worry about recovering or rediscovering a non-museum human culture, but a founding and refounding one.

The moment is charged both with apocalyptic visions and with auspicious prospects, with lands that show both great fissures in faults that are coming apart to collapse definitively, as well as small openings with promising shoots.

The impression is that of being on the threshold of an epochal change.

It is not that I think that in the Low Middle Ages there were clear signs of a new era to come and for sure there were not for everyone, but I who consider myself certainly among those everyone today, however, have the impression of seizing them. Historical transitions do not go by degrees and with warnings, revolutions are tears but more often the story proceeds with slow transitions, even when it is a paradigm shift, they are not chapters of a book that start on a new page, I know … but in spite of everything I have the feeling that we are really at a terminus for aspects that have guided the economic development of the last 150 years or so.

In spite of the historiography, I think we are at the end of a chapter, and just like in my daughter’s books, maybe it’s worth checking and understanding what we understood, before moving on to the next chapter, where we will need most likely those tools and those concepts.

It will therefore be important to choose well.

Twenty years of work for and with others that bring us today to twenty sentences, which express what I have discovered or rediscovered in these years, and what I think, in my opinion, we need to develop, spread and affirm for the next twenty years.

There are twenty simple sentences, I did not want to speak to anyone in particular, and for this I hope that each reader can be recognized or found in all the sentences, perhaps in some more by direct consonance, in others less, but I do wanted that no one would have been heard as dissonant, or not acceptable and unsubscribable.

In this regard, I asked myself whether the manifesto, in addition to the possibility of being shared, in a contemporary sense but not only, should have signatories, and I said to myself that it would be nice to see the list of people who acknowledged it and signed it up precisely.

But in the end, I told myself that the best signing of the manifesto would be the adoption of the approach and the concrete realization of one or all sentences in everyday life.

As I imagined it, this seed that I hope will be fertile for you could have six development modes, even iterative for each phase or in a loop: approval (appropriation), sharing, comment, testimony, adhesion, encounter (WITH).

Appropriation means that it is felt right, yes your own, as if you could have written it and therefore it is good that through you it is copied and diffused, its originality lies in your being part of it … but not cut and diluted, not instrumentalized and reified … so that it can be exploded and spread by others.

I hope that if these words resonate with you and that you can in turn make them resound in sharing to others, but what I want more is to make them sound stronger and more widespread in the daily application of these practices.

This is nothing but the true adoption of the values that the Manifesto carries forward.

Thank you for your time and