Journal of Experiences
20 May 2019 Giorgia Zambianchi

A brief excursus of how in this last decade we have gone from the hangover for the … to the cancellation from … so-called “social”.

In the world of living beings

there are no things, but relationships.

Do you remember the “crush” of a few years ago towards earned media?

How many times have you seen this image in a ppt? 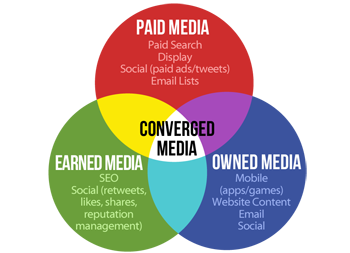 The image, and with it the convergence of three different types of media, has long represented a new way of conceiving communication and marketing, where the integration of different channels allowed people to be reached at all stages of their journey to a final goal, improving the user experience.

Especially compared to the latter point, in more recent times, programmatic advertising was added in order to make the experience of people with display advertising more personalized and specific.

However, there has been an underestimation of what were the real investments on media deemed not to be paid, with particular reference to social media:

For this reason I started speaking of “crush”, because soon to be honest, it was understood that the audiences were not earned but paid, and that the real difference between paid and earned was not in the cost per contact that we would have been ready to pay from then on (because without paying there wouldn’t have been a significant reach), but in the target selection mode (by the advertiser) and in the use of the contents (by the user).

Today we can say it loudly, it is not that the earned media does not exist and that it is not earned, the point is that it is not media, but it is content that intercepts people in different touchpoints and generates positioning, creating, re-establishing or confirming relationships.

As in our over twenty years of experience we have been able to first believe, then see and finally carry on with all our partners, the content is the best promotional tool ; but is not a media: it is a message, it is earned because it is a satisfied need, it is a quick use, it is an effective answer, it is a pleasant experience.

Organic content, would be the way it should be called, in the sense of natural and close, good for people and the environment.

And this is truly integrated in the three modes of distribution or use of the contents, be they promotional, paid advertising (those of which I am in charge together with the team I lead in TSW, managing the budgets of many of our partners), whether they are shared on proprietary platforms (with more institutional contents), or social (with sharing contents)… all as we see converging towards a different and more personal relationship model.

Why companies abandon Social: the cases of Lush and Unicredit

Now that I hope to have clarified the relational and really social role in our perspective of social networks, I think it is understandable or more direct the passage that some brands are making from one model of dialogue to another, often distancing themselves from corporations that control technology and digital platforms.

Examples are the cosmetic brand Lush and more recently Banca UniCredit which have officially announced their abandonment of the Facebook platforms and the subsidiaries Messenger and Instagram. “Enhancing the digital proprietary channels to guarantee a confidential and high quality dialogue” is the communication of Banca UniCredit, “We are tired of fighting with algorithms and we do not want to pay to stay in your newsfeed” are instead the words from the Lush cosmetic group. Both have a solid user base, they decided to reconnect to their followers out of the social networks, finding them back in a real dimension, made of disintermediate and direct conversations.

Of course there is an ethical issue, of data processing and follows scandals such as the Cambridge Analytica case. Certainly there is a question concerning the security and the way in which customer data is managed, transferred or made available and what worries are the hands in which they can end up with transfer or leak, hack or data breach. A theme of trust and therefore of re-appropriation of a relationship of trust, but at least we want to believe that there is also a renewed way of looking at the relationship with people, less guided by digital channels and more omnichannel, or integrated between all the physical contact points and digital, but above all more direct and “true”.

This is what UniCredit does, which is another of our historical partners, but our founder and CEO Christian Carniato does this in this editorial for the launch of The Sixth W manifesto.

We talk about marketing ethics, and someone might turn up their nose seeing the word ethics side by side with the word marketing. This is because in recent years the term marketing has almost taken on a negative meaning, a term that is also used to describe façade actions; more and more often we hear the expression “it’s just a marketing activity”, used to describe something that isn’t completely true, that doesn’t show the whole truth. Giuseppe Morici, in a book that I really advise you to read: Fare marketing rimanendo brave persone. Etica e poetica del mestiere più discusso al mondo (Feltrinelli Editore, Milan, 2015) argues that marketing and ethics can get along and find a meeting point. According to Morici:

for marketing ethics, more simply, we mean the search and maintenance of an overall sense of what we do when we do marketing, not as an end in itself, but as inserted in a broader context, in which mankind, human life, relationships and the whole society are constantly put and kept in the foreground (op. cit., p. 13).

it is that which offers destructive narratives, degenerative for people or for their dignity, or which simply proposes false, groundless, untruthful narratives. And the narrative can be false in two ways, at least. False because it tells a brand or a product for what it is not, trying to suggest a use that is not objectively appropriate. Or false because the product is theoretically consistent with the story, it was designed for that use, but it is simply not up to that story, it does not meet expectations (op. cit., p. 34).

Techlash is a neologism coined by The Economist, the fusion of “tech” and “backlash”, which means “backlash” or “recoil”: the big American hi-tech companies that dominate the market, like Apple, Google, Facebook begin to suffer the reaction of states, institutions, brands and people… to what some consider to be excessive power.

Their authority and pervasiveness are questioned, in addition to their ability to respect individual freedoms and a digital detox is started, a detoxification from abuse and dependence on technology, often used as a substitute for concrete and direct relationships.

Basically, we all somehow maybe want that social means something that has more to do with the passions and less with like. It is no coincidence that in Canada Instagram, again one of the platforms mentioned above, is thinking of hiding the number of likes in the photos that will be visible only to the author.

The idea behind it is to get out of the competition of beauty or popularity, to return to the expression of self and the sharing of relevant contents that trigger real relationships with a decrease in inauthenticity and not a trigger for envy or social confrontation.

That said, is it right to abandon or is it right to stay? Everyone must, and in my opinion can, decide by his own conscience. Essential is to be aware of the choices that take place, both for people who leave or spend too much time on social networks and for professionals working in the areas of media planning and content strategy moving from permission marketing, dependency, data security, manipulation, etc.

Anyone who deals with marketing cannot help but wonder, especially in Western society today, what is the sense in continuing to convince millions of people to buy things that basically they do not need, in a world which, however, may no longer even have the resources to manufacture all these products. (op. cit., p. 20).

Listening to people, having a direct dialogue and taking care of them, is now essential for companies that want to bet to a reconnection, creating relationships and establishing a credible and lasting relationship with them . It is their sense of responsibility towards the relationship with the client, which will have to move more companies and lead them to adopt an approach devoted the respectful and protective treatment of their experiences and expectations. We have made a model of this, capable of responding to the need to bring back marketing to consider people in their complex humanity, giving them value and bringing them back to the center of dialogue.