The cognitive load is an extremely useful parameter for the User Experience (UX) to the extent that its monitoring allows us to structure an interface that is as usable as possible. In this sense it is useful to distinguish between intrinsic cognitive load (ICL), relative to the effort the user makes to process the information he is voluntarily seeking, and extraneous cognitive load (ECL), linked to the presence of barriers that hinder the User Experience (eg unclear images, different fonts, inadequate backgrounds, broken links).

Accurate design allows to reduce the extraneous cognitive load allowing a simpler and more immediate processing of information (Moreno & Mayer, 1999). On the contrary, a design that does not take cognitive load into account risks negatively influencing the user’s experience. In order not to burden the cognitive load in a dysfunctional manner, we must therefore pay attention to the delicate balance that exists between the complexity of the information and the usability of the interface.

Think of the anticipatory design di Netflix ed Amazon: on the one hand the suggestions are presented on the basis of the choices expressed above, on the other hand the possibility is offered of discovering the novelties through an active participation of the user himself in the selection process. This equilibrium allows to channel the increase of cognitive load linked to the complexity of information in a functional (intrinsic) and non-dispersive (foreign) way.

But how do cognitive loading and monitoring take place?

The detection of skin conductance (GSR) allows to evaluate the pure activation of the sympathetic nervous system through the monitoring of sweating: its increase is directly proportional to the increase in cognitive load.

The tracking of eye movements (Eye-Tracking) allows to detect numerous parameters directly related to the cognitive load, including pupil dilation and winking (eye-blink). While the number of eye-blinks decreases with increasing cognitive load (Holland & Tarlow, 1972; Benedetto et al., 2011; Ledger, 2013), the pupil tends to expand proportionally to the increase in cognitive load, for then decrease when the load exceeds the limit of available cognitive resources (Beatty, 1982; Granholm et al., 1996).

Electroencephalography (EEG) allows to estimate the increase in cognitive load through the detection of the activity of the prefrontal and frontal areas (FIG 1). Klimesch (1999) has shown that alpha wave synchronization occurs under alert wakefulness conditions, while the de-synchronization of the same reflects cognitive activation conditions to the extent that different neuronal networks begin to oscillate according to different periods and different frequencies. 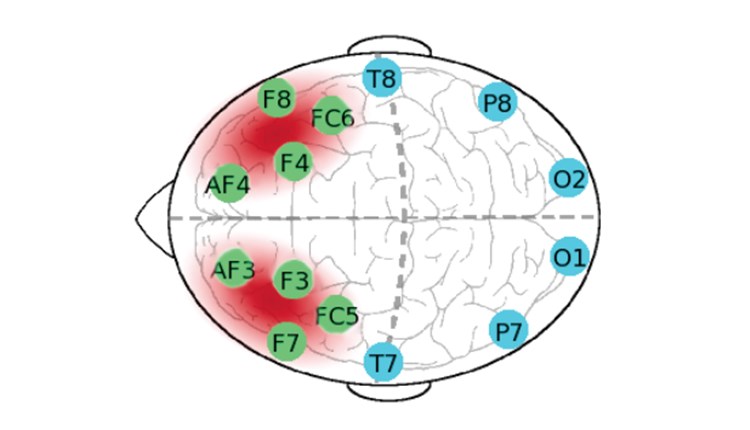 Representation of the positioning of the Emotiv EPOC + sensors (supplied by TSW) and the activation of the prefrontal area (in red).

The objective measurement (quantitative and qualitative) of the cognitive load provides an important aid to direct in a more precise way the analysis of the usability barriers and to assess more immediately the degree of emotional involvement and cognitive effort of the user with respect to the proposed content . The interpretation of the psychophysiological data, reflecting the experience more directly, allows us to structure a more functional and smooth, balanced and complex interface at the same time.