Home Journal Design per le Esperienze At the time of Coronavirus and smart working, being working mothers in Italy

At the time of Coronavirus and smart working, being working mothers in Italy

From what world is world, among the most active and enterprising “communities” we find them: mothers.
Let’s face it, being a mother is a condition that – even if only for practical reasons – clustered a lot.
The reason is clear: in their lives there are little people who, especially if they are of an early age, depend entirely on them, starting from merely operational issues up to the maximum educational and emotional systems. 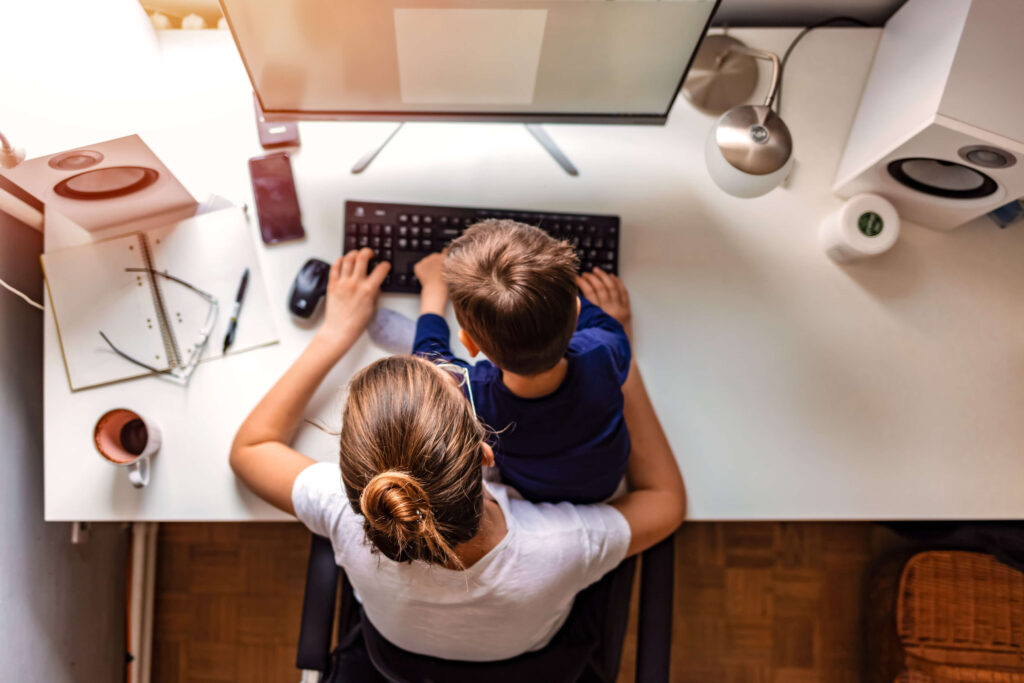 But let’s get to the point: what did it mean to manage “the covid emergency” for working mothers?
We have collected some experience.

L., insurance policy assistant, mother of M. and F., 3 and 7 years old.
“One morning my son asked me – mom but are you going to work with slippers? – ”

V., marketing and communication manager, mother of C. and L., 4 and 7 years old.
“Thanks to the flexibility that my company has been able to offer me, and thanks to the help of my parents, we have come out of this experience in an almost unharmed way, appreciating condition of family lived 100%. Of course, I want my children to live socializing in a natural way, and to have spaces reserved for myself. We often exchanged encouraging messages with other moms, especially to follow school lessons online.”

C., human resources specialist, mother of P., 3 and a half years.
“I often felt frustrated and at fault with respect to childless colleagues, but I rediscovered the value of staying at home and for the first time in a long time, my son was able to enjoy his parents at home without being dribbled between kindergartens and grandmothers.”

Listening to these mothers, and living in the condition of a working mother myself, I will tell you below the main points that have marked the Covid-19 experience, but that in reality could be extended to the world of work in general.

1. The value of compromise

Compromising for a working mother means being able to combine everything without constantly feeling the weight of guilt and frustration, it means accepting the fact that a person’s value must be considered in the round.
It is not humanly possible to expect to give 100% on all fronts: work, home, children, husband, friends, relatives, …

“There were days in the lockdown period when the only sentence that could console me was – you can’t do more, accept the compromise of being a mother!”.

It is evident that the promise (promissus) is established between being a mother and being another (a woman, a wife, a professional, …).

2. The ambiguity of the mother / worker / professional role

“I was simultaneously wearing at least two roles, it was destabilizing.”

The place where you live, where your children grow up, where there are piles of linen to fold and arrange, where there are children’s games scattered more or less everywhere, where the background noises often correspond to the theme song of the cartoons or fraternal quarrels, that same place also becomes – simultaneously – the place of (continuous) calls, of remote meetings with customers and of the notorious concentration that should characterize the time of work.
The same overlapping of reality occurs in the woman, who is a mother and a professional, sometimes a housewife and entertainer, inventor of games or peacemaker of adverse souls, educator and teacher (especially if the children in question are of school age).

3. Time does not extend

“My colleagues are doing their best, they are taking advantage of the slow quarantine time to participate in training courses, read, study, update. I? I don’t even have time to shower.”

All the mothers interviewed confirmed that during the quarantine period, especially in the first phase of total closure, they were swallowed up by the time factor.
The usual 24 hours had to contain many more activities than usual at the same time. Let’s take a likely example. In everyday life at the time of the covid, a mother is lucky if, when she gets up, the children still sleep: she manages to have breakfast, fix the kitchen, prepare lunch, take a few minutes to herself, and then start working. Here the number 1 wakes up and has a bad day, he wants to be with his mother because he knows she is at home, he wants to work with his mother, he wants to help her (“mom, can I crush on the computer?”).

After a while, any child number 2 wakes up, who wants to go out, at all costs. Mother and father share the whims of offspring until they find some compromises (see point 1), thanks to which the mother manages to work “quiet” for about 2 hours. Then comes the turn of the father, change of parent. Then comes the time for lunch. The choice of what to cook and how to put agree all family members. The kitchen to be arranged. The small son to sleep. The other to entertain (without resorting to devices and cartons h24). The very important call of a project. The deadline already postponed. The emails to send. The expense to be ordered and collected. The games to invent. The dinner to think about. The kitchen again to be fixed. The living room has now become a jungle. Children to wash and especially fall asleep.

Then the mother reads a message on Teams:
“Do you attend the 6pm webinar?”

And she questions herself daily about the priorities of life

Almost all mothers admit, without a doubt, that children come first in the priority scale.
But attention: this statement is often misleading because it does not mean that the woman, once she becomes a mother, no longer has an interest in activities that are not children and family. It does not even mean that professional ambition fades or that the growth potential in the working world is canceled.
Having children certainly forces greater organization and a careful and daily selection of priorities, and leads to giving value to the quality of time rather than quantity.
Optimizing is certainly a term that is part of the vocabulary of working mothers.

The term, extremely abused in this period, is often confused or misinterpreted.
One of the main mistakes is to confuse smart-working with telework. Telework is to work exactly as in the office, with the exact same times, but in another place: for certain roles and activities it is absolutely necessary to talk about telework.
Smart-working, on the other hand, is linked to a concept of agile work and greater accountability of the professional. It is he, independently, who plans the days and activities according to deadlines and priorities and in agreement with colleagues and customers. Working in smart means introducing flexibility and elasticity as a modus vivendi.
Only smart-working can commit to a working mother, unless the children are in kindergarten, school, grandparents, or in any case without the mother (and father).
When there are children at home, and everyone is at home, as happened in the quarantine period, teleworking is inapplicable. While, albeit with some effort and with some necessary decrease in workloads (and a total understanding by colleagues and employer!), it may be possible for parents to work in smart.

6. The whole world is NOT a country: only in Italy having children is a problem

The average number of children per woman in Italy still drops, settling at 1.29 (Istat data 2019): I do not think that in the face of this constant decrease we are able to amaze. The conditions for working women certainly do not encourage the decision to have children, at least not at a biologically compliant age.
The gradual postponement of reproduction, as well as the increase of women without children, is due to university time, master’s degrees, numerous internships, which often take time to turn into a real work contract: in 2020 the first work experience could start at 28, the age at which our grandmothers had at least two children.
Then there are the women who decide to start their own business: for them, the experience of motherhood may be still delayed, given that they are totally responsible for their turnover trend.
The mentality that having children represents a “problem” in the world of work was well manifested during the epidemiological emergency period. To say that “work from home is allowed to women workers with children” is incomplete: work from home with children must be considered extremely agile, because you cannot think of placing children in front of a screen all day or leaving that they take care of themselves. For this a smart job must be applied, in the true sense of the word (see point 7).
However, looking at examples like Denmark or Iceland is always a good thing.

In conclusion, it can be said that the Covid-19 emergency has brought to light a much broader and more debated problem and that Italy should take it to heart to avoid firing valid professionals, who often find themselves in the condition of having to choose: work or family.
Probably by introducing a more flexible, agile and open mentality, one could try to facilitate the coexistence of the two realities, so that women can feel fulfilled both according to nature, as mother, and according to society, as worker and active part of a system.