Our daily experience is a continuous succession of pieces of experience that communicate with each other, even when this was not initially expected. It can happen to anyone to go to work angry because the morning alarm has not sounded. And at that point, it is almost inevitable to get upset because the moka takes too long for coffee or get angry about the excessive traffic.

On the other hand, the mood of a person after winning the National Lottery will be elevated for the following days, almost independently of what will happen to him.

It is therefore in the public domain that the previous experiences can somehow condition the perception of the subsequent ones.

In this condition, there is an enormous amount of possible combinations and influences that are difficult, if not impossible, to predict. However, some of these can be controlled or at least monitored. Especially in communication.

Can an advertising spot be influenced by previous experience?

For example, consider broadcasting or uploading a commercial online. The context in which advertising videos are displayed can be partially defined. Does changing the context have any effects on how a well-studied spot is perceived by those who see it?

For example: does the transmission of my commercial during a horror film improve or worsen people’s perceptions? Would it benefit you more if inserted in a love movie?

Would something change in what people perceive if my video on YouTube or Spotify was preceded by a poor advertisement? Or would I want to focus on a halo effect?

Can the variation in the perception of a spot according to the context be measured?

The research on this is clear: the perception of a spot is influenced by what is transmitted first. But what research still does not tell us is whether this change can be detected physiologically.

In the world of neuroscience, Davidson’s famous experiment has shown that there are different activations in the two hemispheres, depending on whether the experience is pleasant or not. This asymmetry in activating brain areas, called FAA (Frontal Alpha Asymmetry), is today considered a reliable indicator of the emotions of approach and avoidance.

We, therefore, wanted to test our thesis with a study that recorded the different responses of the brain thanks to the EEG, the electroencephalogram. If you are interested in deepening the use of this valid tool, we talk about it in this article.

Differences in the perception of the “iPhone X Apple – Unlock” commercial

To understand what perceptual differences can bring different previous spots, we conducted a test to evaluate the users’ perceived of the “iPhone X Apple – Unlock” spot when this was preceded by spots of a different nature.

We selected 30 participants and invited them to take part in our study. It is important to underline that only 30 people were sufficient for this type of evaluation because the brain’s physiological responses move according to predictable models (if you are curious about the sample size, read this article).

We then split the participants into two groups, and before the Apple video, we showed each group a different spot. The first group has previously seen “Donazioni Alì 2018“, a social video that talks about CUAMM, Medici con l’Africa, which presents a different structure from the classic TV spots, both in terms of editing and content. The communication of issues of social relevance often calls into question negative emotions, to succeed in persuading the public. It is evident that in the classic TV commercials such emotions are not recommended.

To the second group, before the Apple commercial, was instead shown Nike’s one «Believe in something. Even if it means sacrificing everything»: definitely an activating spot that stimulates completely different emotions.

All participants wore an EEG to evaluate electroencephalographic responses. The analysis of brain activity has allowed us to obtain information, in experiential terms, rather detailed and precise. The frontal asymmetry allowed us to understand if the vision of the Apple commercial could be conditioned in any way. And above all it allowed us to quantify this difference. 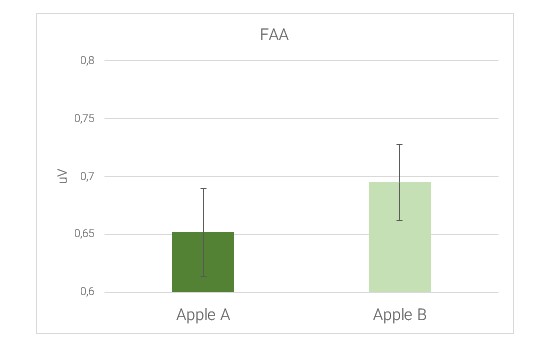 In particular, the graph highlights how the spot experience is always perceived in a pleasant way (the asymmetry value is positive). But this value is significantly higher if preceded by a particularly activating video (Apple B).

The graph above shows the average brain responses of FAA second by second throughout the commercial. It is evident that there is an experiential coherence but positioned at a higher level.

This test demonstrates and confirms how the context is fundamental in the perception of a factor, as in this specific case, of an advertising product. In the case of a positive reaction to the content itself, another dynamic and activating previous content reinforces the positive perception of the spot.

Now try to do an exercise and move these arguments off the screen. Try to think of this pattern in luxury experiences, like a dinner in a starred restaurant. It is not enough that the food is good if the context is not up to par. The sublime experience of an exclusive and superfine recipe would not be worth the expense. It is therefore not enough to make your piece well: any experience is a funnel made up of moments that will influence the following ones. And if we can improve our access points, we will automatically improve the quality of the experience we are offering. This opens up a reflection on the ability to plan a pleasant wait that acquires a new and increased value, perhaps even greater than the experience itself. Not for nothing, Lessing said that “Waiting for pleasure is pleasure itself”, as we have shown you in the analysis of Leonardo da Vinci’s Last Supper.